Bifold vs. trifold wallet; which is better? 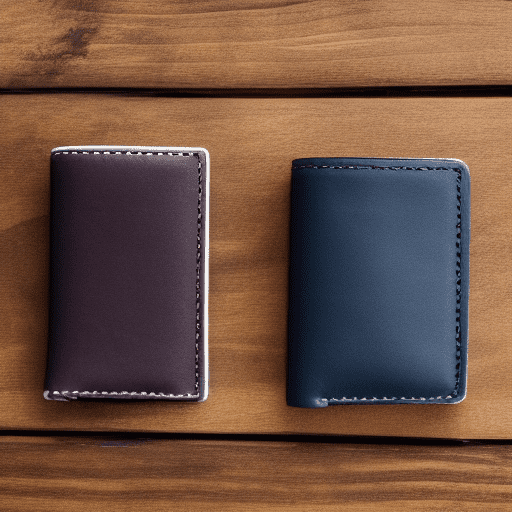 Do you know the difference between a bifold and a trifold wallet? Some people seem to like one more than the other, but do you know which one is the better option for you?

Let’s look at the pros and cons of each type of wallet to ensure you can make the best decision for your needs. Keep reading to find out more!

Looking for a new wallet? Make sure to shop our vegan leather bifold wallets before you go!

Bifold wallets are one of the most popular types of wallets on the market today. They’re typically made from a single piece of leather or fabric and fold in half. This gives them a slim profile when closed, making them easy to carry in your pocket.

However, they can come in a wide assortment of materials and styles. Here’s a bit more about the types of bifold wallets you’re likely to come across:

The standard bifold is the most common type of bifold wallet because it’s a good choice for people who don’t carry many extra items in their wallets.

An expandable bifold wallet is shockingly unique and has a bit of extra flare when compared to the standard bifold. This is because it has an extra flap that can be opened to reveal additional card slots or a place to store receipts. Expandable bifold wallets are a good choice for people who need to carry more items with them, such as their ID or insurance cards.

Love this post? Make sure to check out our other article on billfolds vs bifolds before you go!

With so many types of trifold wallets on the market, it’s easy to become overwhelmed. However, they all typically follow the same general design.

A trifold wallet will fold in thirds, with two compartments for cards and one larger compartment for cash This gives trifold wallets a bit more bulk than bifolds, but they typically have more features as well.

Here’s a look at some of the most popular types of trifold wallets:

A checkbook trifold wallet is a trifold wallet that has a built-in checkbook holder This can be helpful for people who need to write checks. Occasionally, they’ll also have a place for you to store your register

An ID trifold wallet is a trifold wallet with a clear ID window This can be helpful if you need to show your ID often, such as when you’re going through security at the airport

Some trifold wallets are made of leather, some are made of fabric, and some are even metal. Each type has its benefits and drawbacks.

Leather trifold wallets are generally the most expensive option. They’re also the most durable, and they tend to look the best. However, they can be bulky and challenging to fit into tight pockets.

Fabric trifold wallets are often more affordable than leather alternatives. They’re also lighter and frequently have extra compartments or pockets for cards and cash. Nevertheless, they may not be as tough as a leather wallet and might not look as good.

Metal trifold wallets are the lightest and most slim option. They’re also the least expensive. However, they’re not as stable as leather or fabric wallets and can be difficult to open and close.

There are many different types of wallets out there. But finding the best bifold wallet can be tricky. There are many aspects to consider, from style to functionality to price. However, keep in mind that we’ve done the research for you and compiled a list of the best bifold wallets on the market to ensure you can find the perfect one for your needs.

The best bifold wallet for your unique situation should take the following into consideration:

Your Budget: How much are you willing to spend on a bifold wallet?

Your Style Preferences: What style of wallet do you prefer?

Your Needs: What do you need to be able to carry with you?

Is a trifold or bifold wallet better?

Is a tri-fold wallet good?

Knowing whether or not a tri-fold wallet is good for you means understanding how you’ll use it daily. If you require carrying around a lot of cards and cash, then a trifold wallet might be a good option for your lifestyle.

Which type of wallet is best?

There is no one-size-fits-all answer to this question, as different people have different needs and preferences. However, some of the most popular types of wallets include the trifold wallet, the bifold wallet, and the minimalist wallet. Each type has its own unique benefits and drawbacks, so it’s important to choose the wallet that best fits your individual needs.

How long should a wallet last?

A wallet should last at least two years, but often they last much longer. A good quality wallet should be able to withstand a lot of wear and tear, but it’s important to take care of it properly so that it lasts as long as possible. Make sure to avoid exposing your wallet to water and extreme temperatures, and keep it in a safe place when you’re not using it.